Vinery began a busy week at Inglis Riverside Stables on Sunday with a Top 2 finish for turnover at the HTBA Yearling Sale.

Meeting the market with a 100% clearance rate, Vinery sold 15 yearlings at an aggregate of $446,500 with top price of $75,000 paid for a Headwater colt (pictured) by agents Paul Moroney and Catheryne Bruggeman. 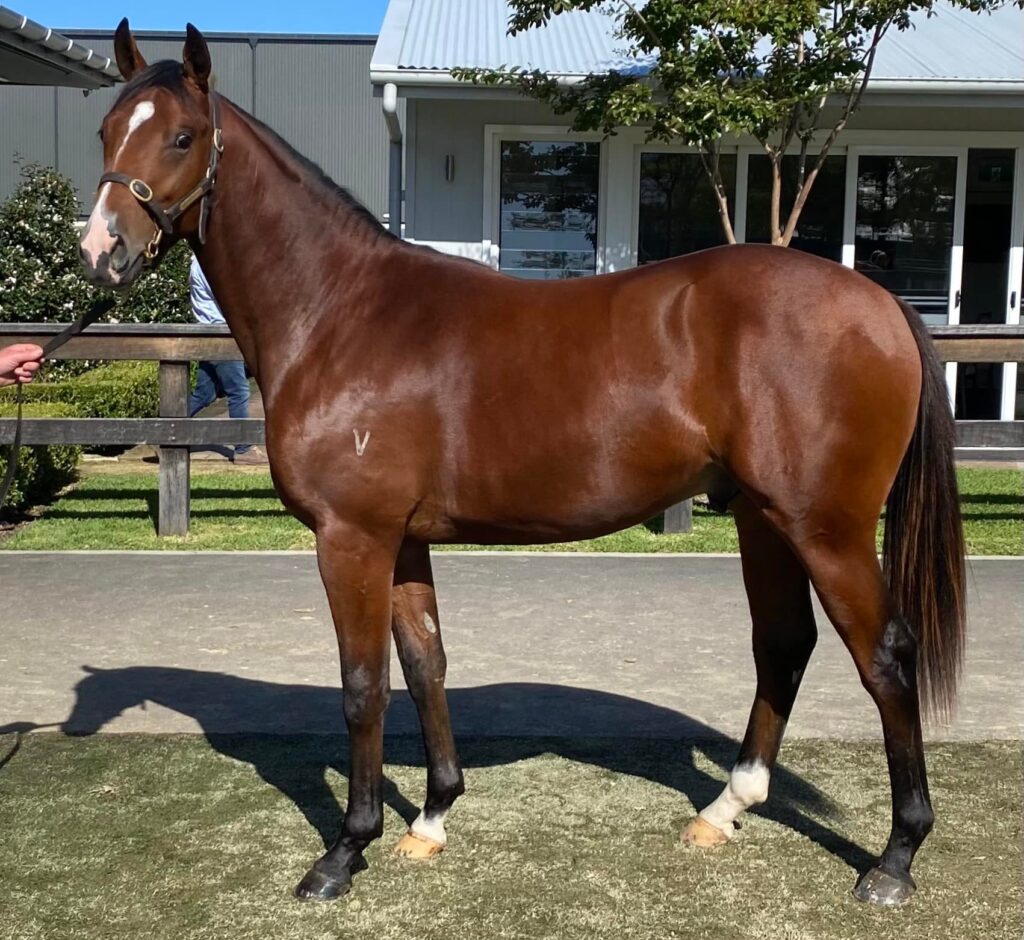 “He is a cracking colt and was our first purchase of the day for CJG Racing,” Moroney said.  “There’s so much of his paternal grandsire Exceed And Excel about him.”

The Headwater – Madame Zara colt (Lot 162) is from a winning half-sister to South African Group 1 performer Tamaanee (Teofilo) and his second-dam is a half-sister to I Am Invincible.

Purchased by Victorian trainer Kane Harris, he was offered by Davali Thoroughbreds and is from a Sebring half-sister to Bendigo Guineas LR winner Milwaukee (Fastnet Rock).

“We were lucky enough to secure the colt we were after,” Harris said.  “He vetted fantastic and there’s exciting times ahead with him and some other lovely yearlings to have entered our stable over the last couple of weeks.”

Headwater (Exceed And Excel) stands at Vinery for a $16,500 (inc GST) service fee and he has more immediate black-type goals at the Adelaide and Brisbane carnivals starting with Aitch Two Oh in the Without Fear Stakes LR at Morphettville this Saturday.

Aitch Two Oh (2f Headwater – Very Dogmatic by Swiss Ace) was a free-wheeling winner of her first two starts by a combined 9 lengths and there were excuses when runner-up in the Dequetteville Stakes LR last time out.  Jockey Jake Toeroek reported it was his intention go forward again, however, the filly was slightly slow to begin and he was unable lead.

Headwater’s multiple Group 2-winning 3yo filly Jamaea is ready to take the next step up to a Group 1 victory in next month’s Stradbroke Hcp (1400m) at Eagle Farm.  Dodging the heavy tracks in Sydney, she returned to Queensland on Saturday and flew home behind stablemate Count De Rupee in the Victory Stakes Gr.2 at Eagle Farm.

Co-trainer Luke Price was thrilled to win and just as taken watching Jemaea finish third.  “That was a flashing light.  She was just outstanding considering the time since her last start. It was unfortunate they had to clash but a good track was the most important thing.  She will go home to her own environment for the next week or ten days.  She’s a good traveller and will be aimed at the Stradbroke.”

Vinery has 10 lots catalogued for the Inglis Weanling Sale on Wednesday & Thursday and outside clients have entered 8 first-crop foals by its exciting Group 1-winning sprinter Exceedance (Exceed And Excel).  Exceedance has wowed breeders with his initial foals in a crop that numbered 94.  “They’re athletes with scope, strength and substance,” Vinery Bloodstock Manager Adam White said while confirming his service fee would remain at $33,000 (inc GST) this year.  “We’ve been really impressed and the feedback from our clients has been terrific.”

Foals by Headwater (6), Star Turn (3) and All Too Hard make up the Vinery consignment to the Weanling Sale.

On Friday at the high-profile Chairman’s Sale, Vinery (as agent) will offer the young black-type mares Sheezdashing (Lot 70) and Vanna Girl (Lot 86).

Sheezdashing (Myboycharlie) was a Group 1 runner-up in the 2018 SAJC Oaks and is in foal to Shalaa (Ire).  Vanna Girl (Husson) won to Group 2 level in the BRC Roses and bowed out with a Listed placing in the Ballarat Cup in November.

On Sunday, Vinery has 11 lots entered for the Inglis Broodmare Sale and elsewhere in the catalogue there are two mares in foal to Vinery newcomer Ole Kirk – Ariegea (Lot 513) and Pepperano (Lot 638).