Buyers gave Vinery their stamp of approval at the 2019 Inglis Classic Sale and among its graduates is promising colt Much Much Better.

Vinery has 28 yearlings catalogued for the 2020 Inglis Classic Yearling Sale off a near-perfect clearance-rate last year when Much Much Better topped the draft at $280,000.

Much Much Better (2c Stratum – Dayeala by Starcraft) was purchased by Randwick trainer John O’Shea and he looked an early winner after hitting the line to win a Rosehill barrier trial on Tuesday morning.

O’Shea bought him for Viribright Racing owner Y P Cheng who is best known in Australia for racing Group 1 gallopers like Northern Drake under the Domeland banner.  His bloodstock manager Kevin Connelly had to fend off several underbidders to land the grey colt at Riverside Stables.

“He had been out a lot and I wasn’t surprised by the competition,” Connelly said.  “He’s a very active horse and is a standout in our opinion.”

Vinery sold Much Much Better (as agent) for Queensland clients and there has been another recent update to the pedigree in Hong Kong.  Play Wise, a half-brother to his dam Dayeala, won at Happy Valley for trainer Dennis Yip on January 15.

Vinery’s Classic Sale graduates also include Frolic (Husson) and Sweet Deal (Casino Prince) who filled out a feature quinella in the $250,000 Inglis Classic RL at Randwick in 2018.

This year’s Classic Sale consignment from Vinery on February 9, 10 & 11 has numerous highlights starting with the filly by More Than Ready from Doomben Roses Gr.3 winner Lasoron (Lot 247).  The best of her four winners to date has been Sugaronne (Phoenix Stakes LR).

The build-up to Alligator Blood’s Melbourne campaign will begin during the Classic Sale when Vinery offers a half-dozen lots by his sire All Too Hard.  Trainer David Vandyke has pencilled in the C S Hayes Stakes Gr.3 at Flemington on February 14 as the launching pad for his autumn campaign in the Australian Guineas – All-Star Mile.

All Too Hard’s colt out of Max It Out colt (Lot 291) is one of his best on type and he’s also bred on the same Encosta de Lago-sireline cross as Alligator Blood.

His colt from Raischek (Lot 400) has been well-received during pre-sale inspections at Vinery.  The dam is a sister to Adelaide Group 1 sprinter Stirling Grove.  So has the Headwater – Spiritriser Bean colt (Lot 488) from the family of Group 1 Dubai Golden Shaheen winner Sterling City.

Star Turn’s first yearlings averaged $204,000 at the Gold Coast Magic Millions to a top-price of $550,000 paid by Team Hawkes.  There’s another 27 parading at Riverside Stables.

The Star Turn colt from Amberino (Lot 590) is the pick of the Vinery consignment.  He’s a half-brother to Vinery-bred mare Winter Bride who was a brave second in the Railway Hcp Gr.1 and an unlucky fifth in the Telegraph Hcp Gr.1 earlier this month.

Trainers Toby and Trent Edmonds will spell Winter Bride in NZ and set her for another Group 1 campaign targeting the Goodwood Hcp at Morphettville in May. 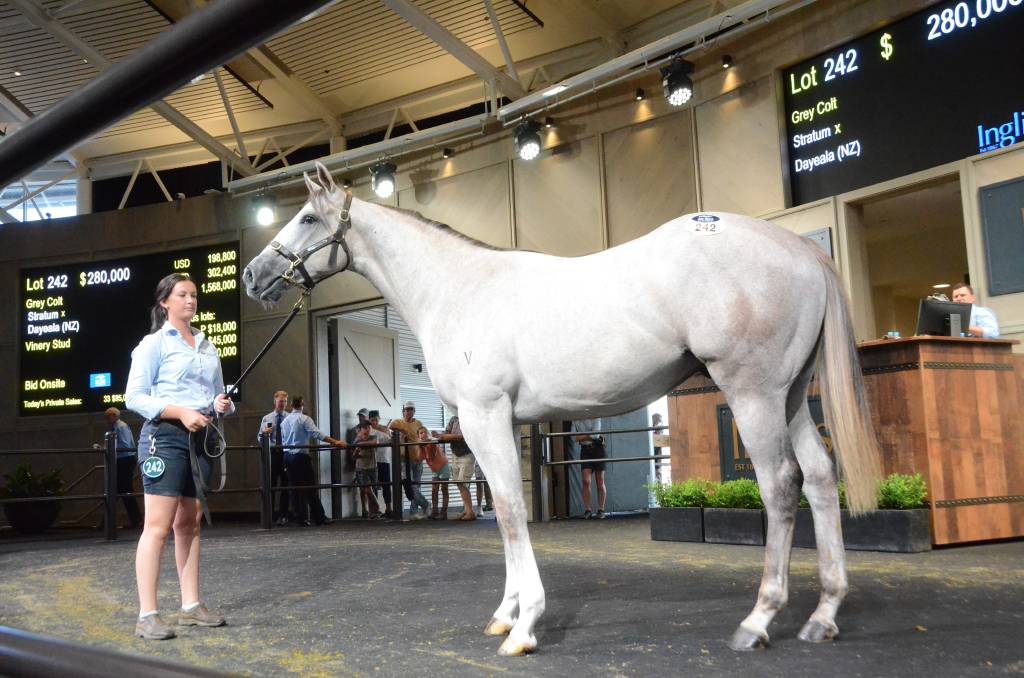