Vinery Stud has topped vendor averages at the 2021 Inglis Easter Australia Yearling Sale in a resounding endorsement of its investment in stallions, mares and farm infrastructure in the Hunter Valley.

At the conclusion of a record-breaking sale, Vinery led the averages with 16 yearlings sold at $650,625.  Vinery also finished third for turnover, grossing $10.41 million off an 89 per cent clearance rate.

“We had a very good draft and the farm has a great history of breeding strong horses,” Vinery general manager Peter Orton told ANZ Bloodstock News.  “Your brand is very important and we’ve had a successful run with winners of the Blue Diamond (Artorius), Golden Slipper (Farnan) and Magic Millions (Exhilarates) in the past few years.”

Vinery sold three millionaire colts on Day 1 and the Stud left it late to market its fourth millionaire at Riverside Stables.  It was worth the wait when the I Am Invincible – Miles Of Krishnan filly (Lot 421) entered the ring towards the end of Day 2.

Sporting the “Big V” brand, the filly was purchased for $1.40 million by Warwick Farm trainer Bryce Heys.  She was sold (as agent) for breeders Patrick Hodgens, Steve McCann and Neil Werrett.

Her dam Miles Of Krishnan (Snitzel) won five races in Melbourne up to 1700m and was Group 2 placed in a Queen Of The South Stakes.  Her half-brother Il Quello Veloce was a Group 1 Champion 2yo of New Zealand and her half-sister Donna Cattiva was a stakes-winning 2yo in Adelaide.

“We had to wait for her and it was a long wait, but we rated her as the best filly in the sale,” Heys said.  “I was really taken with her and it is a fantastic family.  Hopefully, she’s fast and her value as a broodmare is exciting.

“Snitzel is really starting to do something as a broodmare sire and I’m sure that will continue going forward and obviously I Am Invincible is a wonderful sire.”

Trainer Annabel Neasham will prepare Vinery’s millionaire colt by Exceed And Excel bought by Aquis Farm on Day 1 and there are another two Vinery yearlings heading her way from Day 2.

Vinery sire Star Turn was also in the frame on Day 2 with a half-brother to Vanna Girl (Lot 394) that made $300,000.  He was purchased by trainer Toby Edmonds on behalf of the same syndicate that races his older half-sister.

“I like the Star Turns,” Edmonds said.  “We have a filly showing ability from his first crop named Me Me Lagarde.  “She’s a homebred for Gerry Harvey and ran second at the Gold Coast trials last week.”

His latest Star Turn could receive a Group 1 update when Vanna Girl runs in the Queen Of The Turf Stakes (1600m) at Randwick on April 17. 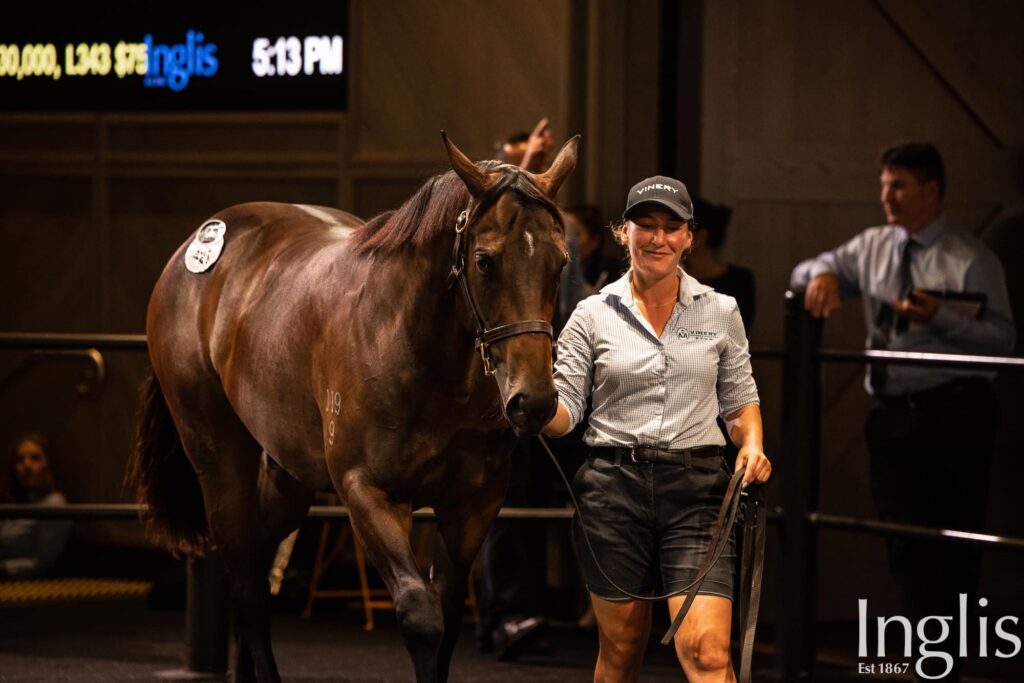 I AM INVINCIBLE – MILES OF KRISHNAN FILLY