Last season’s champion juvenile Warhorse (NZ) gained significant momentum in his push for classic honours with victory in the LR Bonecrusher Stakes at Ellerslie on Saturday.

The Matamata three-year-old had floundered when a fresh-up fourth on a heavy track in the Wanganui Guineas and the much-improved underfoot conditions at Ellerslie brought out the best in the colt.

This time, Warhorse had to overcome traffic problems in the straight but, once angled into the clear, he mowed his rivals down.  “He got himself into an awkward place off a moderate speed,” trainer Jason Bridgman said.  “He got held up but only needs 200 metres on a good track to show he’s got a blistering turn of foot.”

Winner of the Diamond Stakes and Eclipse Stakes at two, Warhorse will now run in either the Sarten Memorial at Te Rapa or the Wellington Guineas.  He will then head to Riccarton for the Two Thousand Guineas, for which he is currently the equal $6 favourite with impressive Ruakaka winner Sacred Falls.

“There’s still physical development and strengthening to come,” Bridgman promised.  “And to finish off like he did today showed he will be hard to beat in anything up to 1600 metres.”

Warhorse was ridden by Matthew Cameron and he had a few anxious moments in the straight.  “I had a whole brick wall in front of me and had to peel to the outside,” Cameron said.  “He dug deep like a really good horse.”

Warhorse (3c General Nediym – Rathlin Island by Giant’s Causeway) is raced by Singapore based Tang Weng Fei after being purchased for $100,000 from Trelawney Stud at the NZ Bloodstock 2011 Karaka Premier Sale. His dam Rathlin Island is an unraced half-sister to Melbourne G2 winner California Dane (Danehill).

Rathlin Island foaled a Zabeel filly in September 2011 before returning to Australia. 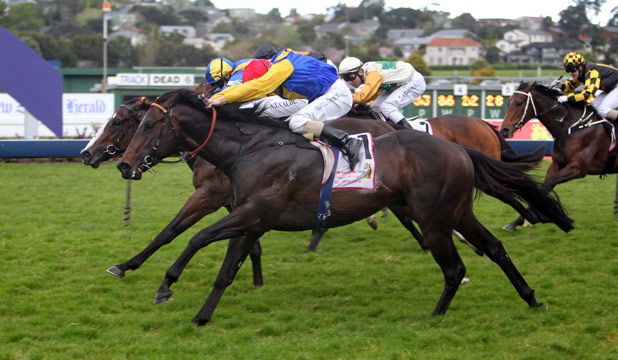 WARHORSE
Ranges up on the outside to win the Bonecrusher Stakes