Favourite punters can thank Plucky Girl’s incredible will-to-win for her daring victory at Doomben on Wednesday.

The well-named daughter of Pluck (USA) squeezed through a slender gap on the rails to justify an odds-on quote in the Oh Hello Plate (1350m).  “I had just about given up hope when she was strung up on the fence,” stable foreman Trent Edmonds admitted.  “But somehow she got through and really deserved that win.

“Well done to Jeff Lloyd.  He showed some nerve to persevere with that inside run.”

Plucky Girl made the breakthrough after three seconds in a row at home on the Gold Coast.  She was educated by Peter Robl at Randwick before transferring to Queensland.

Vinery Stud sire Pluck (More Than Ready) is mobilizing his team for the spring carnivals and the first of them to appear will be Aspect in the Vain Stakes-Gr.3 (1100m) at Caulfield this Saturday.

The Tony McEvoy trained 3yo won the Maribyrnong Plate-Gr.3 and was runner-up in the VRC Sires’ Produce Stakes-Gr.2 at Flemington last season.  “Saturday will probably be a bit short,” stable foreman Michael Shepherdson said.  “He’s been gelded and has only had the one trial so will be fresh.”

Jockey Jye McNeil will be instructed to ride him patiently and then build through the gears.  “He’s a big, stretchy horse and will extend to longer distances than our other classic horses like Azazel and Royal Symphony.”

The trio will be set for the Caulfield Guineas-Gr.1 (1600m) on October 14 and Aspect’s owners also have the option of a longer trip in the Caulfield Classic-Gr.3 (2000m) a week later.

Aspect is a homebred for Peter Robinson & Jack Stott and they raced his dam Innishbeg (Lonhro) to 5 wins in and around Newcastle.  She’s a half-sister to Doomben stakes winner Tina Melina and was covered by Pluck again last year.

Pluck won the Breeders’ Cup Juvenile Turf at Churchill Downs and is one of the best value sires in the Hunter Valley.  Vinery stands him for a $9,900 (inc gst) service fee. 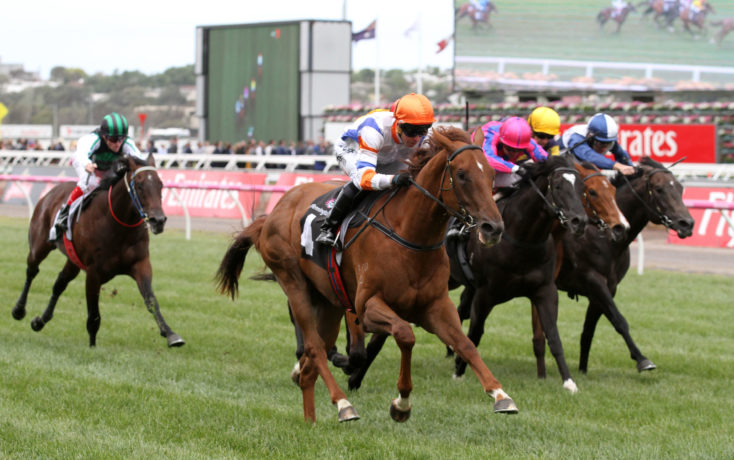