The progressive youngster made headway approaching the furlong and collared Donjuan Triumphant (Dream Ahead) by a short-head in the Betfred Goals Galore Nursery (1200m).  He had won at Redcar and Chepstow in June and July.

Stable representative Tony Gorman, standing in for trainer Richard Hannon jnr, said his boss thought the handicapper had the colt’s measure with the equivalent of 60kg.  “But he was very gutsy and loves his racing.  He’s just like his sire Dick Turpin.”

Hannon’s father Richard snr prepared Dick Turpin to multiple Group 1 victories starting with a four-length blockbuster in the G1 Prix Jean Prat at Chantilly as a summer three year-old.  He was also runner-up in the G1 English and French 2000 Guineas and G1 St James Palace Stakes at Royal Ascot.

Receding Waves (2c Dick Turpin – Welanga by Dansili) has two options next time out on October 3.  He will target black-type in the LR Totepool 2YO Trophy at Redcar or the rich sales-related Tattersalls October Stakes at Newmarket. 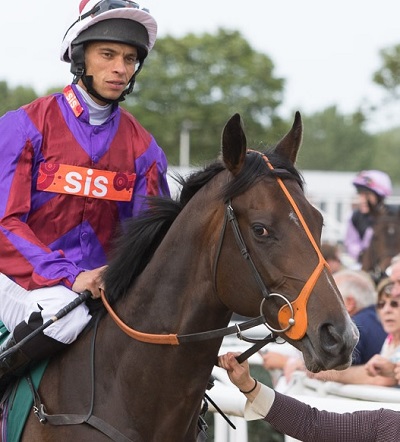